Pros and Cons of Investing in Necessity Retail DSTs

What is necessity retail? Necessity retail is a sub-class of retail that consists of recession-resilient, creditworthy tenants in retail and healthcare [...]

Paul Getty, founder and CEO of First Guardian Group, continues our discussion on the Tenant Protection Act of 2019. In this post, he discusses some of the mistakes he’s seen landlords make as they grapple with a host of new regulations that they’re finding both ambiguous and confusing.

Q. Can you give us an example or two of some missteps you’ve seen landlords make in trying to comply with the Act’s provisions?

A. Well, one thing that happened when the law was passed is that landlords began to understand that they had a window between when AB1482 was signed into law on October 7, 2019 and when it was going to become effective on January 1, 2020. Many landlords moved very quickly to raise rents and evict tenants while the law had not yet been formalized and implemented. But what happened in many communities like Menlo Park, Redwood City and Santa Cruz, is that local municipalities made the legislation retroactive, in some cases all the way back to September 1, 2019. This caught a lot of landlords off guard. So, landlords need to be aware not only of what’s occurring broadly in California but also within the communities where they own investment property.

Q. Conversely, are there any wise or smart actions you’re seeing landlords take?

A. Yes, some landlords have been very proactive in becoming informed. This new law has received some media coverage, but it is not widely publicized. Judging by the attendees at our seminars, there is a very low percentage of landlords we see who are aware of the depth and the scope of AB1482 and what it means for them. It is encouraging, however, that we are seeing such a high level of interest in learning more and we view this as a very positive trend. Informed landlords can make far better decisions. There are some other provisions that have been passed – like SB-329 which is outside of the AB1482 legislation that imposes other restrictions on landlords like not being able to screen and prevent Section 8 tenants from coming into their properties. So, there are just several new provisions that require attention and landlords appear to be recognizing the importance of being educated.

Q. Could there be any unintended consequences of the legislation that could negatively impact tenants, investors or developers?

A. There are a lot of people who cannot afford to live in California but who want to live in California. And there are a very large number of people who rent. If it weren’t for their ability to rent, many of those people couldn’t afford to live in the state. Here’s an example of an unintended consequence: Take a situation where a landlord has a duplex or multi-family rental and they’re saying they’ve had it with all these new regulations and intrusion into their business and they choose to sell their property. It’s more likely that the buyer of that property is someone affluent who intends to live in it. If this becomes widespread, then there will be fewer rental properties available, and when in short supply, rents will obviously increase – exactly what AB1482 was trying to prevent. To the extent these provisions remove property from the rental pool, it will exacerbate the current problem of people being able to live in California. We’re also seeing in many areas – San Jose in particular – where it’s becoming exceedingly difficult to get the permits to build new properties.

Q. Are there any other initiatives gaining momentum in the state which investment property owners should be concerned about?

A. Absolutely. As I mentioned, SB-329 which was passed in 2019 is just one example. That’s why we encourage landlords to get plugged into organizations like the California Apartment Owners Association to see the myriad of things that are happening. As an example, in Sacramento, there was a law passed in late 2017 that is now holding landlords accountable for illegal activities of their tenants in the rental properties they own. So, if tenants are caught growing marijuana in their home, and you are the owner of the property and you’re renting to them, you can be fined $500.00 for each plant that the tenant is growing. Since the law was first passed a few years ago, estimates of $94 million in fines have been levied against landlords. We’ve heard of cases where individual landlords have been fined for hundreds of thousands of dollars!

If you have any questions, please feel free to reach out to Paul directly at 866-398-1031 or schedule some time on Paul’s calendar. 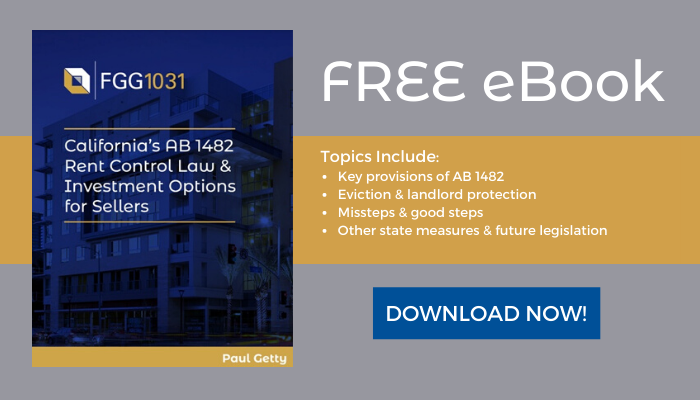 Pros and Cons of Investing in Necessity Retail DSTs